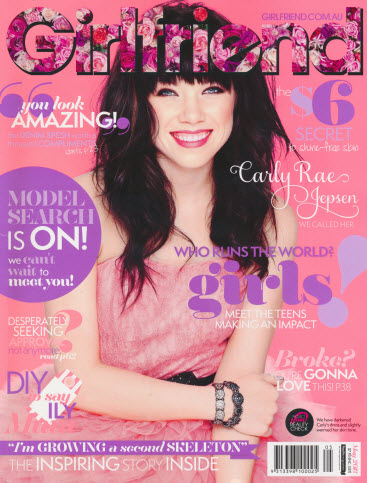 My last two reviews (‘Excellent advice on helping a friend with an eating disorder and dealing with stalking’, ‘Pressures to sext and give oral sex’) have been almost entirely positive. That’s pretty unusual.

The May issue makes this a trifecta.

Whenever I pick up the latest issue of teen girl mags, I hope to find articles which might inspire a global vision in girls, expand their horizons and help them see they can make a contribution in the world. So I was very pleased to see the piece: ’Who runs the world? Girls!’  While the header is somewhat exaggerated, the article describes the different lives and rights of girls around the world and gives examples of young women working to change their cultures. The campaigning of Malala Yousafzai, 15, for the rights of girls to an education in Pakistan is included. You may recall she was shot by the Taliban in October last year and is now recovering in the UK. Readers can log on to educationenvoy.org to learn more. Arranged marriage and not allowing women to drive are examples of denial of rights of women in Saudi Arabia. Manal al-Sharif (who I had the pleasure of hearing speak via a Skype presentation at the Great Women Inspire event in Brisbane on International Women’s Day in March) was arrested for driving a car in 2011 and initiated the Women2Drive campaign which readers are encouraged to support on Facebook. Sexual violence in India is highlighted, with readers encouraged to join the OneBillionRising.org movement against it. In the US, Julia Bluhm, 15, collected 84,000 signatures for an online petition asking Seventeen magazine to stop retouching pics. Staff have now signed a Body Peace Treaty pledging never to alter a model’s face or body. My only quibble here is the treatment of North Korea. Amnesty International, writes GF, “alleges that North Korea imposes severe restrictions of association, expression and movement.” The horrendous human rights violations against North Koreans by its own rulers are not mere allegations! An estimated 200,000 are locked away in prison camps (gulags).  First-hand accounts demonstrate the reality. “North Korea’s prison camps are a closed-off world of death, torture and forced labour where babies are born slaves, according to two survivors who liken the horrors of the camps to a Holocaust in progress.” GF mentions North Korea’s imposition of officially approved hairstyles which yes, indicates a certain lack of freedom. But perhaps forced labour, being tortured in a concentration camp or watching your family starve as a result of your Government misdirecting money to create the world’s biggest militarised state are also worthy to include. North Korea is also described by GF as ‘a self-reliant’ state. That’s one way of putting it. Totalitarian is another. And I’m not sure how self-reliant is a country where 16 million people require food aid according to the UN. (I would love GF readers to read The Orphan Master’s Son, the 2013 Pulitzer prize winning novel by Adam Johnson. While fictional, it draws from real suffering of the people of North Korea. It’s one of the most profound books I’ve ever read).

Related articles include ‘Small ways to change the world’ (including volunteering, donating time, money, blood etc) and ‘Charity 101: Get clued in on the charitable basics’. This piece highlights the works of NGO’s and non-profits including Amnesty International, Green Peace, Red Cross, the Salvation Army, the Smith Family, UNICEF and World Vision. GF cites its own charitable work including sponsoring an African child through World Vision and donating goods to women shelters.

Also commendable is ‘How to respond to racism…and other prejudices’ which provides practical advice on standing up to those expressing racist views (except for where your safety might be at risk). ‘I was raped at knifepoint’ is the personal account of Amelia, 20, attacked on the way home from a night out.  She spent two months recovering in hospital. Unfortunately her rapist was never found. “I’d urge anyone to come forward and get help if they’re attacked. There’s lots of support available, and the help I’ve received has given me a new perspective on life.” Plaudits to GF for giving survivors of sexual assault a voice.

‘So you wanna go vego’ looks at the health benefits of vegetarianism and discusses the reasons girls might explore it. However it does include some of the downsides such as the risk of anaemia (many girls are already significantly iron deficient), lower levels of Vitamin B12 and insufficient levels of Omega-3 fatty acids. Girls are encouraged to get advice from a dietician before starting out. ‘Kick-ass breakfast’ encourages girls to start the day with a healthy breakfast. Good practical advice on what to eat to kick the day off, so important for girls who may be skipping meals.

The sealed section deals with ‘The silliest sex rumours you’ll ever hear,’ e.g ‘Everyone is having sex but me’. GF’s own survey showed it’s not everyone – one in four said they were having sex (I wrote about the survey findings here http://melindatankardreist.com/2012/12/newsflash-75-girlfriend-readers-not-sexually-active/.

It’s not news that I’m no fan of the model search (especially not ones that have 13 year olds entering). GF’s search gets a big plug here, featuring nine pages of 2003 Runner up Samantha Harris and her “flawless skin, envy-inducing eyebrows or lips some celebs would pay good money to get” (yes, she is praised for other things, but is it good to encourage girls to be ‘envious’ of anything other girls have?).

Maybe it’s because I’m about to take off on a break, but getting back into zone positive…

With Mother’s Day approaching, GF offers ‘Fix a fight with your mum’.  Readers are encouraged to think about what they want to achieve from an argument and not be intentionally hurtful or cruel. “Speak in a positive tone of voice, and keep the discussion focused on the matter at hand, rather than rehashing the past,” says Sue Yorston, counsellor for Relationships Australia. Be calm, factual, don’t exaggerate or blame your mum. “Make sure you stay respectful of her feelings too:  and apologise when you should. This is a great way to show your mum that you’re being mature about the situation, are genuinely sorry and, y’know, that despite what you said, you love her.”

On behalf of all mothers with daughters everywhere, thanks GF for that.