Put the iPhone down and talk to your Kids!

Home>Society & Culture>Put the iPhone down and talk to your Kids!
Previous Next

Put the iPhone down and talk to your Kids! 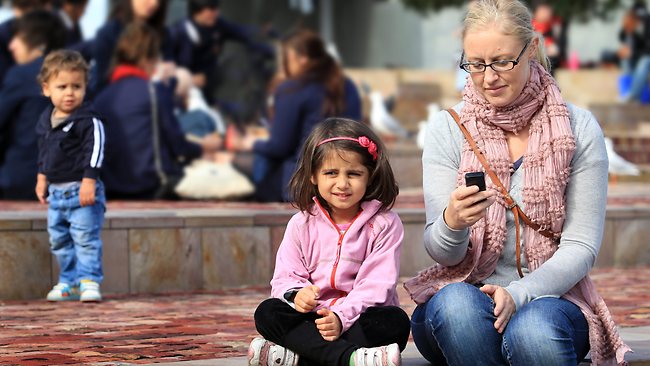 The recent SMH article outlining author Mem Fox’s genuine concern about the increasing use of technology as a replacement for parental interaction with their kids was spot-on, and should raise alarm bells – but will it?

I know I’m not Gen X, Y or Z – happy to admit I am a Baby Boomer – but if the trend of poor communication between parents and their kids continues, it won’t matter what generation you are…you will be losing the art of communication in its most basic form. The impact of poor communication can reflect long term on the relationship you have, or are building, with your kids.

A few months ago I was sitting in a local Hungry Jacks in Victoria, sipping on coffee before heading off to one of my afternoon workshops. There, across the way, was a young mum (probably about 30) with her pre-school aged daughter. Typical of girls, the youngster was talking non-stop; asking questions; pointing at passing traffic; asking if they could go to the park before heading home.

The restaurant (for want of a better word) was decorated in ’50’s style, with pictures of James Dean, Frank Sinatra and Elvis Presley adorning the walls. Mum and daughter were sitting directly underneath a photo of Elvis Presley. Now, mum had not made eye contact with her daughter the entire time, responding to her daughter’s chatter with nothing but a “mmmm” and preferring to continually text whoever was on the other end of her iPhone.  Daughter looked up at the photo and asked “Who’s that, mummy?” Mum might genuinely not have known who it was – although I find it impossible to believe that a 30 year old would not recognise Elvis Presley. A fleeting glance was followed by a “Dunno” and mum continued to text. I could have walked over and throttled her! I said to my husband on our way out, “When that little girl is a teenager and doesn’t tell her mum anything, she is simply paying forward the favour her mum has paid her!”

I could trot out all kinds of research to support my claim that relationships with our children are forged from a very early age – infancy – not when we think they are verbal enough for us to have a conversation, or when we think they can understand what we are saying! There are so many ways to communicate our interest in our kids – not everything needs to be put into words. It can be an expression, a touch, a smile, eye contact – but texting is NOT one of these ways. Texting while our kids are talking to us is even worse. What kind of a message are we sending?

There are many more examples I could detail, but I won’t. Sadly, the habit of texting as our prime method of communicating is not confined to the young. We ‘oldies’ do it too. Many of us do know the alternative methods of actually speaking person to person, but in our hectic world we often choose the easy way to keep in touch.

My fear is that if we don’t put our phones away and make more genuine attempts to keep lines of communication with our kids open while they are young, it may be too late once they hit puberty and adolescence – a time when it is typical for teens to display ‘attitude’ and non-verbals! Don’t wait until it is too late – make the effort to talk to your kids; make eye contact; show genuine interest in what they are doing. If we wait until we’re ready, it may be too late.

It can start with a simple five minutes of reading together with your child – or ten minutes in the park actually playing with them, instead of sitting on a bench and texting. As Mem Fox states, “If we can’t spend time with our kids, we shouldn’t be having them.” This is not rocket science – this is parenting. What you do, or don’t do in their early years has a major influence on their long-term development, and time spent now translates into a more positive relationship with your child in later years. Over 25 years I have worked with too many parents who have missed the boat and now regret it – don’t be one of them.