Would You Accept This

Would You Accept This 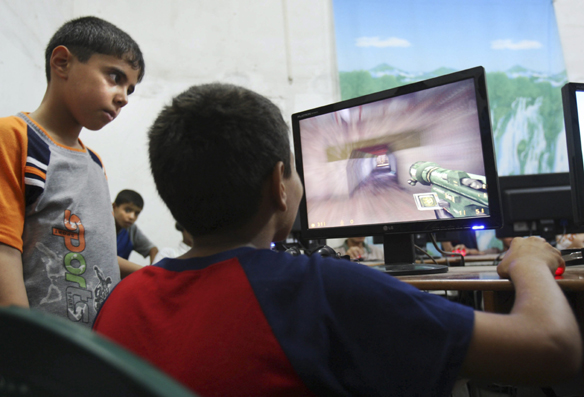 Imagine for a second that you arrive to pick you child up from football, netball, a music lesson or even school.

Imagine as you get out of the car, all you can hear is the most abhorrent racial, homophobic, sexist or religious-based bullying.

I’m assuming you wouldn’t be happy about this.

I’m assuming you’d have something to say about this.

I’m assuming that some of you might even decide to do something about this.

As parents we wouldn’t willingly let our kids – whatever their age – surround themselves with that – would we?

I wonder how many of your kids play video games?

Call of Duty for example? If you have a teenage son, chances are you’ve heard of this game. Essentially players take on the role of a soldier in some war-torn country. Such games have been the subject of conspiracy theories that suggest the US Military funds their development as they serve as a most effective recruitment strategy. This has never been proven, although the US Military have directly funded one such game called, America’s Army. (It’s free by the way!)

Whether you choose to allow your child to play a game such as this often comes down to the rating right? Call of Duty is rated 15+. By comparison EA Sports’ NBA Live 15 is rated G. But both of these ratings carry the caveat, “Caution: Gaming experience may change online.”

Why? Because once you play online, [WARNING: This video contains strong language and themes] this can happen. It’s worth noting that this video also highlights some the steps that the gaming industry is taking to address the issue.

But the fact remains, even if you don’t allow kids to play violent games, they can still find themselves in a racist, homophobic, sexist and toxic environment, just because they want to play a game of basketball online!

Even Moshi Monsters – an online game for young kids that pitches itself as a “safe online game where you can adopt your own pet Monster and go on amazing adventures together” – has had to address issues of bullying!

Go on, watch the video (SAME WARNING APPLIES), and have a chat with your kids about it!

Because you wouldn’t accept this anywhere else would you?