Parents Are Having Much Farther Reaching Effects Than They Know

Home>Mental Health & Wellbeing, Technology>Parents Are Having Much Farther Reaching Effects Than They Know
Previous Next

Parents Are Having Much Farther Reaching Effects Than They Know

We were pretty good at keeping computers and televisions out of bedrooms, but as technology developed we somehow missed that phones and tablets ARE computers.

One of the main conversations I have with parents is about their exhaustion at parenting with so many devices in the home. Parents feel out of control. At my seminars I often ask for a show of hands and the majority of families own a collection of iPads, iPods, other tablets, an Xbox, a Wii, a DS, iPhones and more…

Most parents wonder if their limit setting is actually worth it.

It’s so constant isn’t it? I have 3 children and it feels like I have to remind them of the boundaries with technology regularly.

But be encouraged, it IS worth it.

A study of over 1300 families, by my colleague in the US found, “that parents are having much farther reaching effects than they know.”

The study indicated some powerful benefits for children when parents set healthy limits on entertainment screen time (TV and video games) and limits of the type of content viewed.

Some effects are seen more immediately and others over time.

(Please keep in mind that ‘limiting’ does not mean banning all technology or taking everything away – it indicates a healthy balance and an inclusion of many other actives, such as sport, drama, kicking a ball, going shopping, chatting over dinner…)

“When parents are involved it has a powerful protective effect across a wide range of different areas that they probably never would have expected to see,” (Douglas Gentile)

Two Immediate effects of placing limits on media (which seem obvious but are great to see):

1. Those children spent less time on TV and video games

However, it is the long-term effects that surprised the researchers the most. Children whose parents set more limits on the amount of time spent with media 7 months before:

1. were now getting more sleep

2. were getting better grades in school

3. had an indirectly positive change in Body Mass (because children were simply moving around more)

2. less aggressive behaviour toward their peers 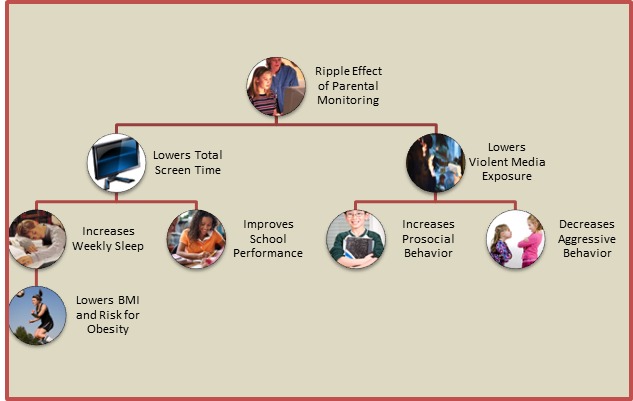 Doug reminds us that the effect is not immediate and that makes it difficult for parents to recognise. We don’t notice children growing taller in a day, or see Maths grades improve after a week of extra maths lessons, but after a year? – well that is when we suddenly notice that our son has grown too tall for his trousers.

Thus, this principle applies to media exposure. i.e Our children are not going to become violent street brawlers after a few days of playing

violent video games, or get an F in English after staying up for the World Cup, but over time the distributed effects on their lives are real.

A note on aggression: Parents assume that we mean that children will display violent behaviours or become involved in school punch-ups after playing days and days of GTA, and when that doesn’t happen, they say, “You see, there is no effect on my child! The study is nonsense.” However, learned aggression is not related to direct copying behaviours, but ways of thinking. Thinking about how others see you, their intentions toward you and their value as a human being etc.

It is important to remember that the largest growing market of gamers are adults, hence the games developed with adult themes. Yet there are far too many children playing violent (MA15+) games, while still in the process of growing and developing their sense of self, sense of others and learning about the world around them.

If you still don’t believe there is any effect on children please think about a simplistic illustration for a moment – How do you learn a phone number? You repeat it over and over and over until it is committed to memory. Even when you erase the number from your phone, it is burned into your brain for a long time. I can still remember the phone number from my childhood home in another country, which changed over 25 years ago. Can you?

“When you tell your child that they’ve reached their limit of screen time for the day or that they aren’t allowed to play a particular game because of its content, you aren’t going to see their grades improve immediately or better behavior tomorrow (in fact, you might see a lot of complaining today). But this study demonstrates that the effects of setting and enforcing limits has powerful benefits for children’s health, school, and social outcomes. That’s remarkable when you realize that these are all very different types of outcomes, and setting media limits has a measurable impact on all of them for the future!” A/Prof Douglas Gentile

In our home we don’t always get it perfectly right, but this study is encouraging to all of us ‘limit setters’. It is worth it. We do have a positive effect, even if we don’t notice it today.

Collett Smart is a registered psychologist, psychology tutor at UWS, speaker, freelance writer and mum of 3. She writes on her blog here. You can follow here on Twitter at @collettsmart and on her Facebook page here.