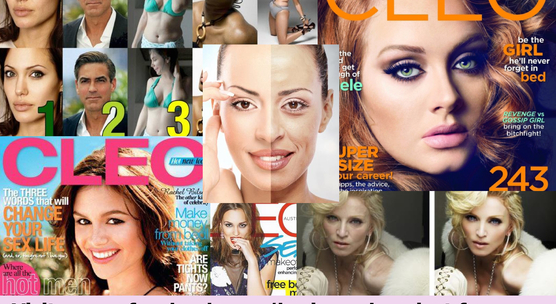 Jessica Barlow, a 20 your old student in Melbourne has got the ball rolling by setting up a petition to demand that magazines like Cleo and Cosmopolitan stop altering the images they feature in photo spreads because of the damage it can cause to young girls by increasing any body image issues that they might have.

Jessica feels that she and other young women don’t want “to constantly be made to feel inadequate,” she continues that “Teenage girls have pimples, frizzy hair and lumps and bumps on their body. Yet the models and women in magazines have all these features wiped away and hidden using digital image editing software. Girls learn by reading magazines full of ‘perfect’ images of women that they are ‘ugly’ if they have pimples, frizzy hair or a waist that isn’t perfectly sculpted.”

So join the 13,620 supporters who have already signed the petition and go to change.org

Stop Cosmopolitan and Cleo Magazines using photo-editing software like Photoshop to change the appearance of their models.

The petition is asking Cleo to

“print one unaltered photo spread per month, and to put a disclaimer on any image that has been digitally altered such that the appearance or shape of a person has been changed.”