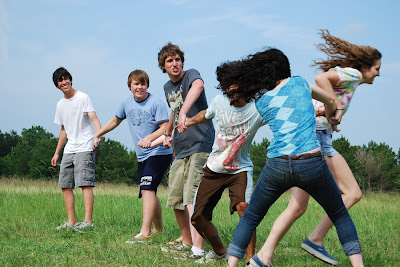 Is it April Fool’s day? Of course it isn’t. So why am I reading ridiculous headlines like this?

Melbourne schools ban playground games because of lack of resilience

The report stated that schools were banning Tiggy because kids would just give up when they were tagged, and quoted the Victorian Principals Association president Gabrielle Leigh as saying some schools had imposed bans on other games, such as skipping and swapping collector cards, over problems sharing.

Or perhaps your child can’t spell properly? Just ring up the school to complain, and they’ll put a stop to those pesky English lessons too.

Is this really what we’ve come to?

The article claimed that, “Smaller families and over-protective parents are being blamed for a lack of resilience,” although blamed by whom it doesn’t say.

Whilst there may be something to the “over-protective” parents line, I find it incredible that schools would resort banning such things. I once heard of a school that banned the giving out of birthday invitations unless every child in the class received one.

Schools have to take the lead here, and draw a line in the sand, rather than perpetuating the issue by banning opportunities for kids to develop resilience.

You don’t build resilience by talking about it – I don’t care what any overpriced course tells you – you build it by working though issues. A struggle here, a bit of drama there and coming through it the other side.

I don’t know who said it to me, but they once described some parents as “Helicopter Gunship” parents. That is, they hover around blowing up anything and everything that might cause their child to struggle.

We’ve come to expect “Helicopter” parents, but we’re in danger when the “helicopter” mindset takes over schools as well.

If you were the person that gave me that analogy, let us know in the comments section so I can appropriately quote you in future!

Author: Dan Haesler, he is a teacher, consultant, and speaker at the Mental Health & Wellbeing of Young People seminars. He is the co-developer of Happy Schools and blogs at http://danhaesler.com/ and tweets at @danhaesler