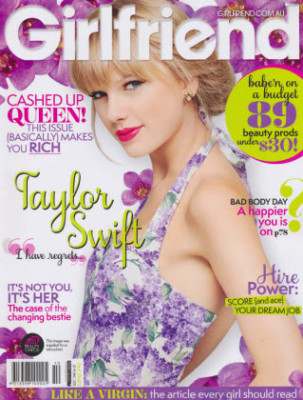 Losing your virginity and double standards for men and women: Girlfriend October 2013

The article ‘Like a Virgin’, in the October issue of Girlfriend, argues, quite rightly, that there is a double standard when it comes to men losing their virginity and women losing theirs. “It’s time we stopped talking like virginity loss turns boys into men and girls into ruins,” writes Emily McGuire.

McGuire includes the experiences of young people including Karen, 15, who “just wanted to get it over with” and Krissy who was keen to “move on from feeling annoyingly virginal.” Despite the big event being less than physically great, she says that afterwards she felt “relieved” to have done it.

Holly, 17, says: “Boys think if they don’t lose their virginity by a certain time, then they’re not man enough. Then they do, they’re praised. With girls, it’s easier to say you are a virgin than not, because girls are given a hard time when they do have sex and can become labelled.”

Of course there is a double standard. We don’t see any ‘purity balls’ where sons promise their purity until marriage before their mothers – it appears to be always a father/daughter event. But I would have liked to have seen some more exploration here for why Karen wanted it over and done with and why Krissy felt it was annoying to be a virgin. Perhaps there are messages in the culture that contributed to the girls feeling this way? A culture that tells girls they should ‘put out’, pornographic based socialisation into early, even sometimes premature, sexual initiation. There no stories here from girls who felt that it wasn’t easier to say they were a virgin than not. Girls often tell me they pretend they are sexually active for fear of being seen as losers or hung up. A 15-year-old girl I met at a school a couple of weeks ago told me she was considering having sex with a 19-year-old she had met twice because she was being teased for not having had sex yet and feared being labelled a prude. It was clear she wasn’t ready. I didn’t feel there was an adequate representation of stories here because an experience I am told of, over and over and by girls of increasingly younger ages, is pressure to engage in coerced and unwanted sex and regretting first sexual experience characterised often by drunkenness and force. It’s good GF reminds readers that 75% of its readers are not sexually active (according to a survey) and that “If a guy threatens to leave you if you don’t have sex with him, dump him quick-smart. Dude’s a jerk.”

I always welcome article which encourage girls to save – especially in magazines which so often have pages of fashion and beauty products often with hefty price tags. ‘Save Like it’s Hot’ helps girls to understand the importance of savings and keeping on top of debt. Girls are encouraged to open a student account, avoid using other bank’s ATMs, to obtain a high-interest savings account and shop online – always look out for sales, free shipping and discount codes – as well as how to avoid unnecessarily high phone plans, prepaid phones with limited amount of credit can help girls save on phone costs. ‘The Great Piggy-Bank Overhaul’ further encourages girls to have money-saving goals by compiling a budget by, for example, using a free Track MySpend phone app. Have an account that can’t be accesses by ATMs. Many other helpful and practical suggestions are given (some I’ll even apply myself!).”Saving isn’t about ‘going without’. It’s about finding the smartest way to get what you want,” says Jackie Gower from Simple Savings. And this will appeal to parents: “…you’ll have money to do what you want – whether that’s to travel, pay for a degree or put towards a fun experience, like concert tickets, without mooching off your parents.” . Readers are given a quick lesson in economics and global finances.

‘You’re Hired’! Now What?’ contains practical tips to help girls get the job they’re after including having a strong resume, being pro-active, practicing job interview skills and dressing appropriately. There is a list of do’s and don’t’s for when you have secured the job as well as a detailed column on ‘Your Rights at Work’ covering harassment, being paid for overtime, minimum wage, meal breaks and the right to refuse to work unreasonable hours.

‘Life After School’ features three girl’s choices at the end of school including working in retail, continuing to university and taking a gap year. After these opening articles I found myself glossing over ‘Help, it’s a formal emergency! (‘My hair looks more fancy dress than fancy…’).

Back to the serious stuff, ‘Status update S.O.S: How to respond to distressing messages on social is a vital inclusion in the magazine. So many young people are sharing their dark wishes on social media, including their desire to end their lives, that it can be overwhelming for their peers (indeed for adults) to know how to deal with what could be a cry for help. It was good to see GF emphasise the need to seek professional advice. Girls are told it’s great to help others and take another person’s problem seriously and offer support, but that they also need to look out for themselves. Says Dr Alexandra Parker, psychologist for national youth mental health foundation Headspace (headspace.org.au)”It’s important not to feel like you need to be the one to solve their problems. Try to let them know about the options for getting professional support.” Girls who are themselves depressed or upset are encouraged to get support from trusted adults or a professional service as a serious concern is that they can receive the wrong advice online.

Related is ‘8 telltale signs you’re stressed’ which helps girls recognise stress and offers some strategies for dealing with it. The signs are: a short attention span (your brain can’t think of anything other than dealing with the stress, you’re gasping for breath (the body’s stess response causes you to breathe faster to allow more oxygen to reach your brain), your hair is thinning, your muscles tense, you have colds one after the other due to a depressed immune system, your skin is hot and flushed, your heart thumps and tummy churns (stomach cramps, diarrhoea and nausea are common symptoms of stress). Girls are encouraged to change their thought pattern, engage in breathing exercises and try yoga poses. I would have liked to have seen advice for seeking professional help also – sometimes the breathing just isn’t enough and stress can be crippling. It’s not always something you can manage yourself.

Real Life stories this issue include 15-year-old Mia who had to put her passion for dancing on hold after it was discovered she had an extra bone in both feet which required surgery. She tells how she dealt with injuries, follow up surgery, and the bone growing back and how she’s not letting any of this hold her back. Kate lost her beloved sister Nicky in a motorbike accident in Thailand. Kate talks about her grief and the family’s decision to establish the Nicole Fitzsimons Foundation (nicolefitzsimons.com) to honour their daughter and sister. It will offer financial support to passionate and gifted performing artists and sportspeople who need assistance to reach their goals. The foundation also aims to raise awareness of travel safety overseas to save other families from tragedy, with Kate as the voice for Travel Safety Campaign (an Aussie tourist dies in Thailand every three days, with traffic accidents the number one cause). “Saving lives by sharing Nic’s story is a passion that give me a sense of fulfilment I can’t find elsewhere. I can’t prevent this tragedy from every happening to another innocent family, but I’ll do everything within my power to save as many families as I can from suffering this heartache. The real message beneath it all is simple – life is precious, so treasure it,” says Kate. Born with kidney disease, Bekky ,18, shares how her parents gave her a kidney each to help her survive. Her older brother Brett, who also had infantile polycystic kidneys, had died as a six-month-old. Bekky herself almost died when the kidney her father gave her began to fail and she was on life support. Her mum stepped in with one of her kidneys and this one is working.

‘Um, Do I know you’ helps girls to manage when a best friend has changed and they no longer feel they recognise them. “I liken friendship to a rubber band,” says Marina Passalaris, author of Beautiful Minds: A Journey of Self-Discovery for Teenage Girls. “When they’re together, they’re very, very tight. Then they stretch away, but they come back again. It’s all just a part of growing up.”

Yes, I know, I’ve come this far without mentioning the announcement of the winner of Girlfriend’s 2013 Model Search. Her name is Olivia. She’s 15, from NSW and wants to be a surgeon and work to address homelessness and youth suicide. I really hope she does. I will say that Olivia looks quite natural, compared to the adjacent full page image of Georgia May Jagger (for Rimmel, sponsors of the model search) which is clearly heavily photoshopped. Her skin is as pure and flawless as a newborn baby’s bum (I don’t care how good that foundation is).