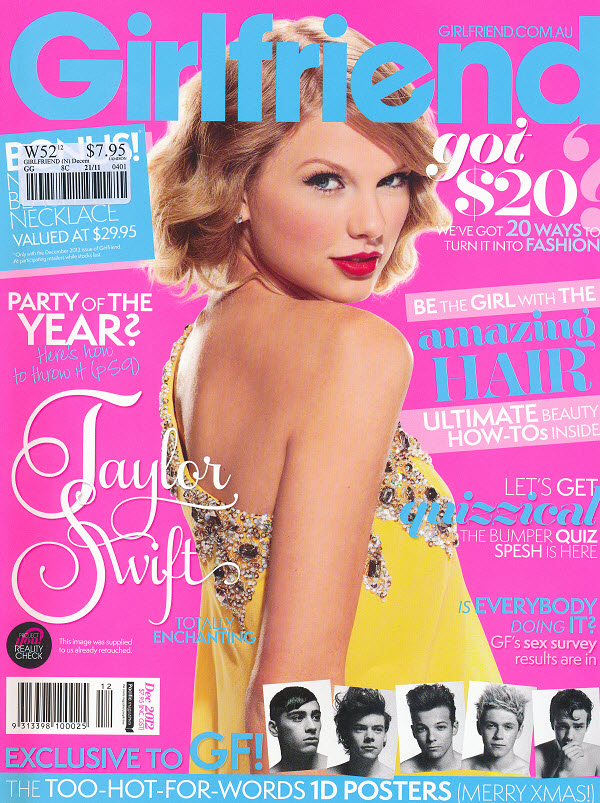 Newsflash: Three quarters of Girlfriend readers are not having sex – sex survey

This may come as a surprise: 76% of Girlfriend readers are not sexually active.

In this pornified world, with sexual messaging hitting them in their faces the minute they wake up in the morning, and given the assumption that most young people are having sex and that those who aren’t must have something wrong with them, these findings are revealing.

More than half are waiting to at least be in love.  Maybe they want more than a cold soulless hook-up that leaves them feeling used? Maybe they’ve seen what coerced, unwanted sex has done to their friends? (Research from W.A shows more than 80% of girls regretted their first sexual experience, characterised by drunkenness and force). It would be valuable if GF were to unpack this further – that the desire to be ‘

in love’ survives in a culture which treats girls as merely sexual service stations and orifices to be penetrated (read Zoo lately?)  is worthy of deeper investigation.

exercise proper informed consent (14% of these encounters were with complete strangers).

A quarter say they have felt pressure from peers to have sex before they’re ready (including a 16 year-old who is quoted “They say I’m really stupid for not having sex, but I d

on’t know if I’m ready”), 27% say they have felt pressured from a guy. Perhaps GF could look at how it could better help strengthen and equip girls who are feeling pressured, to resist sexual activity they don’t feel ready for?

Also disturbing is that almost a quarter of GF readers have engaged in sexting, which GF acknowledges is “a risky move considering how easy it can be for others to access those kinds of messages!”  It appears girls aren’t getting the message about the

A total of 64% of GF readers have watched pornography. Of these, 42% watched it alone, 14% with friends, 8% with their partner. The stats are useful but again it would be educational to have more detail. What are they looking at? Why? How are they being introduced to pornography? How does it shape and mould behaviour? How do they see themselves after watching it?

GF readers get most of their information about sex from magazines (82%), friends (75%), school (72%), online (57%), parents (27%), partner (18%) and other (5%). Parents may wonder why they barely figure – of course it’s difficult to complete but are they making themselves accessible to talk about sex with the kids who might want to look to them for advice and guidance?

Regarding having sex, readers were more concerned about how their bodies look (a massive 75% – only two percentage points less than fear of unwanted pregnancy) than about STI’s, HIV/AIDS, being pressured and being hurt physically and emotionally. Suzie, 16, is quoted “I want to have sex with my boyfriend, but I’m worried he won’t like how I look ‘down there’. I don’t know if I should shave or not. I’m terrified he’ll take one look and run off!”

As I’ve said before, current messages about positive body image and completely failing to cut through.

Girlfriend may be trying to redeem itself after its ‘Guy Issue’ last month, which contained every gender stereotype in the book and then some.


This month sees some important articles on what to do when your best friend goes off the rails, depression and fat shaming.

With one in five teens  affected by depression, ‘The Darkness’ is sadly necessary. Depression, it is explained, is more than feeling sad or having the blues. It is an illness that requires treatment. Fifteen signs of depression are listed and two girls quoted about depressions effect. “It really is horrible. I should be focusing on school, but can’t find the motivation. Everything I once enjoyed doing is lost, and I just want to lay in bed and cry all day,” says Emily, 16.

GF advises it is “crucial that you tell a trusted adult – whether it be a parent, teacher, coach, doctor or counsellor….Whatever you do, don’t shoulder this burden alone. It’s not a safe secret to keep, and there is help out there.” Readers are referred to Headspace (eheadspace.org.au/1800 650 890), Kids Helpline) kidshelpline.com.au/1800 55 1800), Lifeline (lifeline.org.au/13 11 14), YouthBeyondBlue.com, Sane.org, Blackdoginstitute.org.au, AU.Reachout.com and Emergency Services (000).

‘Fat is not a dirty word’ is timely, with the emphasis on ‘obesity’ driving girls to engage in more unhealthy eating behaviours. The article unpacks the negative assumptions made about larger sized people, e.g that they are “lazy, gluttonous and irresponsible”. Girls share their experiences of being called a ‘fat bitch’ in public and negative comments from family.

You can be thin and unhealthy, which rarely gets pointed out. Dr Rick Kausman outlines the destructive effects of dieting (depleted immune system, diminished bone strength and long term disordered eating).  The Health at Any Size (HAES) approach is recommended for improving overall health, rather than numbers of a scale. This involved accepting your body, eating mindfully and moving.

But as often happens when I read Girlfriend, I wonder if the right hand knows what the left is doing. Frances Lockie’s piece opens with “Every other day there is a news story about the horrors of the ‘obesity’ epidemic or the latest diet that promises to ‘drop a dress size in a week’ or what kind of clothing is best for hiding those ‘problem areas’. A few pages before is ‘Style School’ where five young women are fitted with bathers designed for their body type and hide problem areas! For example, Sarah, 14, who has an ‘Hourglass’ figure is given a “frilled waistband, as it draws attention to her slimmest area. The frill also skims over her curves, creating a streamlined look.”

And all the good advice in the fat shaming piece could be undermined for many readers who will compare themselves with the airbrushed women in the advertising, the seven images of model Claudia who doesn’t have a ‘flaw’ in sight and nine images of 2012 model search winner Grace Simmons who will never be labelled a fat bitch or be recommended a frilled waistband.