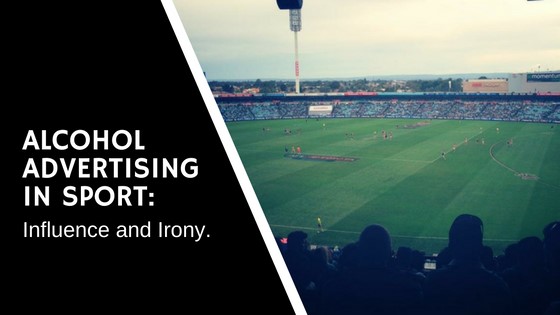 In Australia, alcohol advertisements are not permitted on TV during times that children are likely to be watching, usually defined as between 7:00am and 8:30pm[1]. There is however, one glaring exception to this rule: alcohol advertising in sport. As long as it is during a sport broadcast, alcohol is free to be advertised at times that otherwise would be banned due to the large numbers of underage viewers.

Exposure to alcohol advertising is associated with an increase in the likelihood that young people will choose to drink[2]. Recent research has shown that Australians under 18 received 50.9 million exposures to alcohol advertisements through AFL, NRL and cricket in 2012[3]. Alcohol advertisements are also prominently displayed on many sports teams due to sponsorships. This was recently highlighted during the Euro 16 soccer matches, where alcohol marketing was viewed almost once per minute. This type of marketing further increases young people’s exposure to, and familiarity with, alcohol brands, especially if the young people own alcohol-branded merchandise. Young people who own alcohol-branded merchandise are more than 2.5 times more likely to drink at risky levels[4].

The high level of alcohol branding and advertising in sport is both concerning and quite ironic. As one article recently pointed out regarding alcohol sponsorship of sport “…athletes can’t afford to use the sponsor’s product, due to the way it can impact on their performance”. This is especially the case when considering sports such as Formula 1 or the V8 Supercars. The ethical dilemma of alcohol sponsorship of motorsport, when drink driving causes so much harm, is one that is not often discussed. These examples make it clear that alcohol advertising and sponsorship of sport is more about money than compatibility.

Unfortunately, as long as the current code remains in effect, we will continue to see alcohol advertising in sport on TV, and young people will continue to be exposed to large amounts of alcohol advertising and branding. So why not take the presence of these advertisements as an opportunity to have a conversation with your young person about the role of alcohol in our society?

Having open and honest discussions early with your young person can have a protective effect and reduce their likelihood of engaging in risky drinking behaviours. It is important that these discussions are a two-way conversation, rather than a lecture. Listening to your young person’s thoughts and perspectives helps them feel heard and can also give a parent insight into their young person’s opinions on these topics.

Young people need to be encouraged and guided in forming their own opinions, rather than blindly accepting the way alcohol is portrayed and glamorised through alcohol advertising in sport. In our Party Safe Education seminars, we encourage young people with the great decisions they are already making, but young people also need to be able to form and develop their own opinions. Having this skill will help them make a choice that is right for them, despite the countless peer, societal and advertising pressures they experience each and every day.

More information about Encounter Youth and their Party Safe Education seminars is available from their website www.encounteryouth.com.au.